The book Alexander Hamilton by Ron Chernow became the basis for the Tony-award-winning music Hamilton.  Author Ron Chernow served as the historical consultant for the play.

There’s a story in Chernow’s book about Alexander Hamilton and someone’s misperception of him that made me laugh out loud. It serves as a classic illustration of how perception is not always reality.

Before I get to the anecdote, think about your life for a moment.

Your perception becomes your reality, often with disastrous consequences.

Author Gregory Berns states in his book Iconoclast, “Perception is the brain’s way of interpreting ambiguous visual signals in the most likely explanation possible. These explanations are a direct result of past experience.”

We filter our minds to often believe what we fear, think we perceive, or terribly desire, often missing the reality or the truth.

A glance away can be interpreted as a cold shoulder from a friend, a shoulder which may actually be warm toward you.

Words spoken with passion by a friend or co-worker are interpreted as anger, an emotion that may not be present in the speaker.

An attitude you “pick up on” in your spouse may trigger a negative response from you, puzzling the one who knows you best.

That is how our perceived world becomes our real world. And sometimes we make poor decisions because we’re living in a false reality. 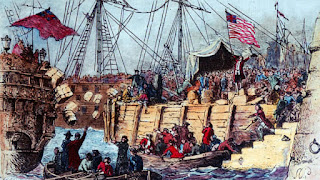 Let me illustrate for you.

Alexander Hamilton, an immigrant from St. Croix, entered King’s College (now Columbia University), New York City, in the fall of 1773. The Boston Tea Party occurred in Boston on December 16, 1773, shortly after Hamilton completed his first semester at King’s Collge as an eighteen-year-old. In the Boston Harbor, American Colonists revolted the against English Parliament by casting barrels of English tea overboard. The Americans were enraged at the Tea Tax and showed their outrage by throwing the tea overboard, shouting “no taxation without representation.”

Tensions increased between the American Colonists and the King of England after the Tea Party.  Americans desiring Independence as a country were called Patriots, and those colonists who were loyalists to King George of England we called Tories). Some English politicians who served in the English Parliament in London wished to destroy the city of Boston as punishment for the Tea Rebellion and “turn it into a modern Carthage.”

On July 6, 1774, six months after the Boston Tea Party, collegian Alexander Hamilton went to The Commons (now City Hall Park) and climbed a “box” to speak to the crowd which had gathered. The Commons regularly hosted impromptu political speeches, debates, and news, and New Yorkers gathered regularly to keep informed. This was Hamilton’s first public speech.  He started slowly and quietly, but words began to flow more quickly and passionately as Hamilton eloquently defended the Patriots of Boston and stated his logical, legal, and civil arguments for American Independence.

After listening to nineteen-year-old Hamilton’s stirring speech, the crowd began to whisper “It is a collegian!”

That speech marks the beginning of Hamilton’s meteoric rise as one of America’s Founding Fathers.

On April 19, 1775, less than a year after Hamilton’s speech, British soldiers killed 8 colonists at Lexington and 2 more at Concord, and the American Revolutionary War began.

Hamilton was still a student at King’s College when the Revolutionary War began.

The President of King’s College, Myles Cooper, had been known as the most vocal Tory in New York. Dr. Cooper despised the rebels who wished to throw off English authority, and he made known his opposition to American Independence as often as possible. In December 1773, President Cooper had admitted the autodidactic Hamilton into King’s College as an “exception” to the typical college entrance requirements.

For that grace and for other reasons, Alexander Hamilton looked on President Cooper “as a father to me.”

But Alexander Hamilton’s vocal support of the American Patriots which began on July 6, 1774, and continued through his erudite essays published in the King’s College newsletter caused President Cooper to wrongly believe Alexander Hamilton had become his enemy.

That was Myles Cooper’s perception, and thus his reality.

This leads us to the anecdote of how false reality can harm you. Five days after Lexington and Concord, an anonymous pamphlet appeared in New York blaming Myles Cooper and four other “obnoxious gentlemen” for the deaths of American Patriots in Massachusetts. Listen to Ron Chernow recount what happened next (emphasis mine).

On April 24, a huge throng of patriots, some eight thousand strong, massed in front of City Hall. While radicals grew giddy with excitement, many terrified Tory merchants began to book passage for England. The next day, an anonymous handbill blamed Myles Cooper and four other “obnoxious gentlemen” for the patriotic deaths in Massachusetts and said the moment had passed for symbolic gestures, such as burning Tories in effigy. “The injury you have done to your country cannot admit of reparation,” these five Loyalists were warned. “Fly for your lives or anticipate your doom by becoming your own executioners.” This blatant death threat was signed, “Three Millions.’ A defiant Myles Cooper stuck to his college post.

After a demonstration on the night of May 10, hundreds of protesters armed with clubs and heated by a heady brew of political rhetoric and strong drink descended on King’s College, ready to inflict rough justice on Myles Cooper. Hercules Mulligan recalled that Cooper “was a Tory and an obnoxious man and the mob went to the college with the intention of tarring and feathering him or riding him upon a rail.” Nicholas Ogden, a King’s alumnus, saw the angry mob swarming toward the college and raced ahead to Cooper’s room, urging the president to scramble out a back window. Because Hamilton and Troup shared a room near Cooper’s quarters, Ogden also alerted them to the approaching mob. “Whereupon Hamilton instantly resolved to take his stand on the stairs [i.e., the outer stoop] in front of the Doctor’s apartment and there to detain the mob as long as he could by a harangue in order to gain the Doctor the more time for his escape,” Troup later recorded.

After the mob knocked down the gate and surged toward the residence, Hamilton launched into an impassioned speech, telling the vociferous protesters that their conduct, instead of promoting their cause, would “disgrace and injure the glorious cause of liberty.” One account has the slightly deaf Cooper poking his head from an upper-story window and observing Hamilton gesticulating on the stoop below. He mistakenly thought that his pupil was inciting the crowd instead of pacifying them and shouted, “Don’t mind what he says. He’s crazy!” Another account has Cooper shouting at the ruffians: “Don’t believe anything Hamilton says. He’s a little fool!” The more plausible version is that Cooper had long since vanished, having scampered away in his nightgown on Ogden’s warning.

Hamilton likely knew he couldn’t stop the intruders, but he won the vital minutes necessary for Cooper to clamber over a back fence and rush down to the Hudson. Afraid for his life, Cooper meandered along the shore all night. The next day, he boarded a man-of-war bound for England, where he resumed his tirades against the colonists from the safety of a study. Among other things, he published a melodramatic poem about his escape. He told how the rabble—“a murderous band”—had burst into his room, “And whilst their curses load my head / With piercing steel they probe the bed / And thirst for human gore.” This image of the president set upon by bloodthirsty rebels was more satisfying than the banal truth that he cravenly ran off half-dressed into the night. Cooper never saw Hamilton again and wept copiously when England lost the Revolution. He could not resist grumbling in his will that “all my affairs have been shattered to pieces by this abominable rebellion.”

“Don’t mind what he says, he’s crazy!” Dr. Cooper had yelled about the man trying to save him.

May God grant us all the grace to recognize that our perceptions are sometimes wrong, and our false realities can lead to catastrophes.